Score Viewer is web based free software. You can display the music score of pre-registered Japanese animation song and game music on the browser. This application is not a general purpose music score display software.

The recommended browser is Google Chrome.

The Song Selection screen displays a list of registered songs. You can scroll the list in the following way.

Click the icon at the top left. Press Up key, Down key, Page Up key, Page Down key, Space key or Home key. Mouse wheel up or down.

If you click this icon, the Song Genre Selection window will display. The current version has the following four song categories.

You can collapse it by clicking on the song title. If you collapse it will reduce the width from 1,920px to 1,560px.

You can change the display direction of the music score by clicking the icon below.

The following icons are displayed on the music score display screen.

Scroll to the end of the music score.

Scroll the music score to the left.

Scroll the music score to the right.

Scroll to the beginning of the music score.

Scroll to the end of the music score.

Scroll the music score up.

Scroll the music score down.

Scroll to the beginning of the music score.

Left : the page number of the music score, Right : BPM (Beat Per Minute)

If you click the MP3/AAC panel on the menu, you can read the MP3/AAC file on the local drive of your computer.

You can also load MP3/AAC files by dragging and dropping the files onto the browser.

MP3/AAC file is not loaded.

The MP3/AAC file has been specified. This is a playable state.

It is in the state of counting off. After count off, it turns green.

An MP3/AAC file is playing.

The Auto Scroll is a function that automatically scrolls the music score in sync with the MP3/AAC playback. Before using this function, you need to adjust the start position of the song.

There are several ways to VBR MP3/AAC files to CBR. I recommend the free software Audacity.

The automatic scroll function is OFF.

The automatic scroll function is ON.

Since the music score data is old, it does not support the automatic scroll function.

The state of the Auto Scroll panel changes when you click it.

This software calculates the timing to scroll the music score based on the "start position" specified on the Calibration screen.

The calibration procedure is shown below. 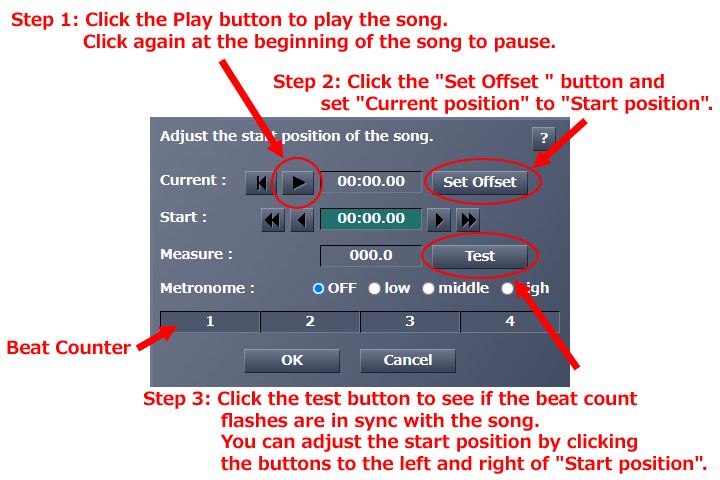 A simple metronome makes it easy to adjust timing.

The rhythm of this metronome is not accurate. It may be delayed by several tens of milliseconds. For Windows, Firefox has a large delay, so we recommend using Google Chrome. This issue will be fixed in the future.

It is in the state that calibration is not executed. The automatic scroll function cannot be used.

Calibration has been executed, but the MP3/AAC file has not been read.

Calibration has been performed. You can use the auto scroll feature.

Since the music score data is old, it does not support the automatic scroll function.

The count-off function puts a 4-beat count when playing an audio file. This is a useful function when you practice playing from the beginning of the song. The current version always counts 4 beats even if the song doesn't start from the 1st beat. This limitation will be fixed in the future.

Firefox has a delay when playing MP3/AAC files. We recommend using Google Chrome.

It is the state where the loop section is not specified.

The loop section is specified, but the loop function is OFF.

The loop playback function is ON.

The loop section is specified incorrectly.

If you click the rehearsal mark panel, the music score will move to the specified rehearsal mark. However, it cannot be clicked during MP3/AAC playback.

The above figure was an example of hiding the 6-part music score in order. You can hide not only the staff notation but also chords, rehearsal marks, lyrics, and TAB units.

The meta information of the currently displayed music score is displayed on the Music Property screen.

On the MP3/AAC player setting screen, you can change various settings for MP3 player control.

On the menu display setting screen, you can select the control to be displayed in the menu.

In the current version, it is not possible to change the common music score settings.

On the Common Settings screen, you can change the scroll speed and language settings. The contents set here are saved in the cookie, and the set values will be valid from the next time onward.

At the first startup, the language setting will change automatically depending on the browser language. The current version is set to "Japanese" for Japanese browsers, and "English" otherwise. However, even if you set the language to "English", Japanese lyrics will not be displayed in English.

The operating environment information as of June 13, 2020 is as follows.

If a fatal error occurs, the above error screen will be displayed. If you continue to see this error screen, please contact us at the address given in the bug report below.

18. Features to be implemented

The following features are planned to be implemented in the future.

* This is a Release history of Javascript version. This is different from the Silverlight release history that was distributed between 2009 and 2016.

Unauthorized copying and replication of the contents of this site, text and images are strictly prohibited. Copyright © 2006-2020 KaK.